This week, the last week of January 2015, outdoor sports company Patagonia will be in Washington, D.C. to screen their groundbreaking (and dambreaking!) documentary “DamNation” and meet with legislators to discuss the problem of America’s “deadbeat dams.”  They will also be presenting information from WDC and other groups, including the Southern Resident Killer Whale Chinook Salmon Initiative (SRKW CSI), about the complex relationship between dams, salmon, and the Southern Residents.  The SRKW CSI has been focusing on the lower Snake River dams of Southeastern Washington, which – like the Klamath River dams that have been the focus of our “Don’t Let Orcas Be Dammed” campaign – block salmon from vast tracts of their historic range, have destroyed thousands of miles of habitat, and have contributed to the decimation of salmon populations on the west coast. 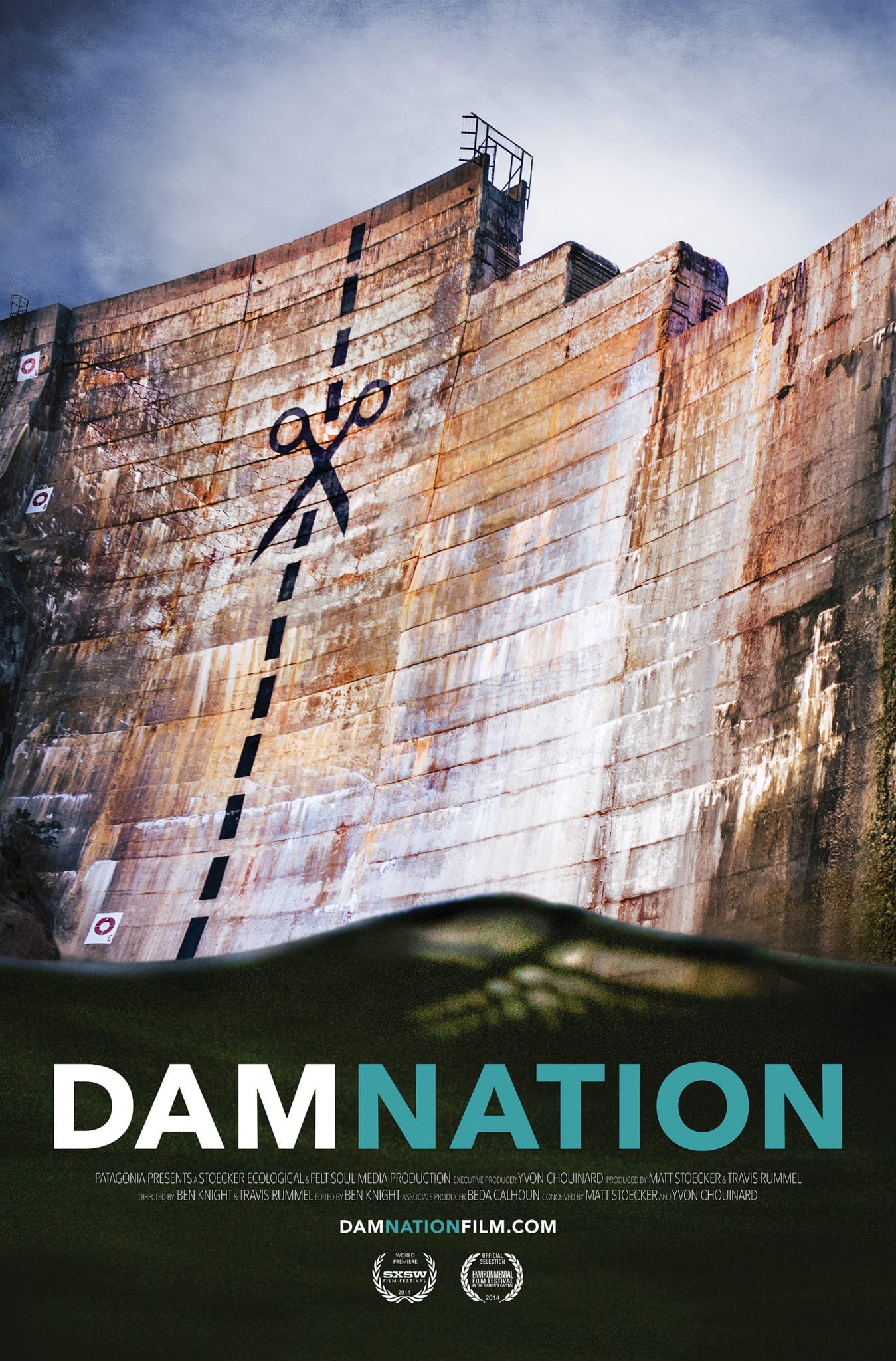 “DamNation” is a beautifully photographed and thought-provoking documentary that focuses on the history of America’s relationship with dams and our changing attitude toward these massive structures.  Dams are a relic of the conquering attitude that used to dominate humanity’s approach to nature – rivers were seen as wild and dangerous, and their drought and flood cycles could determine life or death in small towns popping up along their banks.  Dams were a way to tame, control, and exploit the power of rivers, seen as “engineering victories” that gave man “possession” of the water.  They yielded protection from floods and droughts; provided transportation and eventually, hydropower and electricity; and essentially allowed the settlement of the American west.

Dams are a vital part of American history, but “DamNation” makes the argument that we took their construction too far – we went dam crazy.  At present, there are more than 75,000 dams over three feet high in the US: that’s one built per day since Thomas Jefferson was president (an often-quoted statistic from Bruce Babbitt, former US Secretary of the Interior). Built too fast for developments in engineering and technology to keep up and often without consideration of the consequences, dams turned out to have huge unforeseen costs for the rivers and ecosystems they were built on.  (Sometimes, the circumstances were well understood, but the dams were built anyway – like in Glen Canyon).  Many dams in the Pacific Northwest were constructed without any way for salmon to get past them and return to their natal spawning grounds – a fact that was either unknown, not considered, or just ignored when the decision was made to build them (including the four Klamath River dams and recently removed Elwha dams).  Salmon are the linchpins of the Pacific Northwest ecosystem, connecting rivers and oceans, and feeding everything from tiny water bugs and massive grizzlies to our critically endangered Southern Residents.

The movement towards dam removal in recent years is highlighted in “DamNation,” as Americans realize the negative effects that derelict dams can have.  Dams that are still in place but no longer functioning, or not serving their intended purpose anymore still affect rivers and creatures that depend on river ecosystems.  Old dams that are still in use but are outpaced by modern technology are often not worth the time and money required to bring them up to current standards.  The documentary also examines what happens after dams come down.  Recent projects on the Elwha River and the White Salmon River in Washington have resulted in salmon returning, natural habitat reforming, and rivers that have been under man’s tenuous control for decades are once again free-flowing. We are hopeful that Patagonia’s upcoming efforts in D.C. will move the dam removal discussion forward and bring attention to the problems caused by dams that are now obsolete.  With a new bill currently in Congress to approve the Klamath Restoration Agreements, it is vitally important that we continue to highlight the problems caused by derelict dams in the US, including those in the Klamath and Snake Rivers.

WDC and the SRKW CSI are providing important information to demonstrate the connection between orcas, salmon, and dams; a link that not only shows the far-reaching impacts of damming a river, but is vital to the recovery of the endangered Southern Residents.  Restoring the Klamath and Snake Rivers will help salmon populations in the Pacific Northwest to recover, providing the Southern Residents with the food source they are so dependent on.  Congressional approval of the Klamath River Agreements could set a precedent for addressing outdated and archaic dams in the US – opting for removal and river restoration instead of costly and unnecessary updates or renovation. “DamNation” is receiving a lot of attention right now and is racking up the accolades, and will undoubtedly start a conversation in the halls of Congress about this new approach to dams.  To learn more about the issue, visit the documentary’s website to find a screening near you or stream it online (warning – “DamNation” does have some profanity and a bit of 70’s-style environmental civil disobedience.  View with caution).

Our Don’t Let Orcas Be Dammed campaign is sending information to D.C. this week and still collecting signatures for our letter of support!  Please sign and share our petition and help us make sure the Klamath Basin Water Recovery and Economic Restoration Act of 2015 passes and the Klamath dams come down!

Posted in Blogs & Articles and tagged Dams, salmon, Southern Residents
Preferences
We use cookies to help give you the best experience on our website and information about how you can support us.
Manage options Manage services Manage vendors Read more about these purposes
View preferences
{title} {title} {title}