Originally depleted by whaling, the remaining 500 North Atlantic right whales struggle to recover as they face threats from vessel strikes, entanglements in fishing gear, and habitat loss.  WDC has worked to protect this species from these threats and was instrumental in the release of a regulation requiring vessels over 20 meters (65 feet) to slow to 10 knots (12 mph) in seasonal habitats of right whales. This means the regulation goes into effect at different times throughout the critical habitat areas which correlates with the whales’ migration pattern. In Cape Cod Bay this is between January 1 and May 15. So what happens when right whales show up before  January 1st?

That’s exactly what happened last month, when sightings of North Atlantic right whales in Cape Cod Bay and south of Nantucket were cause for cheers – and alarms. While sightings of these critically endangered species are always welcome, the seasonal speed restrictions off Massachusetts do not go into effect until January 1st and even those do not cover all the areas in which whales were spotted.

Nature is unpredictable. That’s no secret. We can’t expect the right whales to wait until proper protection measures come into effect each year before these whales travel through these waters along their annual migration. Five separate sightings in Cape Cod Bay (December 22nd) and south of Nantucket (December 13th, 21st, 25th and 27th) were reported last month, causing concern for both boaters and this fragile species.

Large commercial ships generally keep to pre-determined shipping channels. In 2006, the traffic separation scheme (shipping lane) into Boston Harbor was specifically altered to  decrease the likelihood of a collision with a right whale. But what about the ships who may take a different route, or Joe Boater who wants to take his friends for a joy ride around the islands? How do they get the message that multiple groups of endangered right whales have been feeding right off the coast? 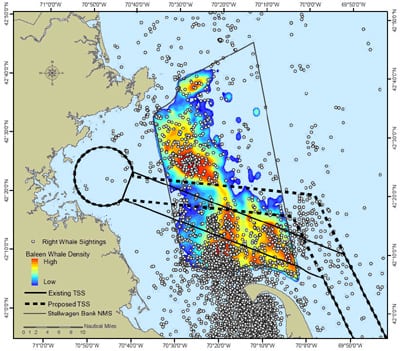 A shift in the shipping lanes (dotted lines) was implemented in 2006 to reduce the risk of striking large whales off the coast of Massachusetts.  The gray dots represent sightings of critically endangered North Atlantic right whales.

In order to make sure boaters were quickly notified to keep a close eye out for these early arriving and slowly moving mammals, NOAA established two Dynamic Management Areas (DMAs) to protect these friendly visitors throughout the month of December. Mariners were requested to route around the DMAs or voluntarily travel through them at 10 knots or less. However, the key word here is “voluntarily”. The question is, do boaters really take notice when a month-long suggestion is made? And while seasonal management actions replaced the Cape Cod DMA on January 1st, the area south of Nantucket is not part of a seasonally managed regulatory restriction and this DMA is only active through January 10th. What happens when our flippered friends visit Nantucket for the Martin Luther King holiday weekend?

This fall, WDC partnered with NOAA and other conservation and research organizations to implement an outreach effort to alert boaters of the presence of right whales year round.

Through a new sign campaign, recreational and commercial boaters are being asked to report sightings of right whales as well as to slow down and maintain a safe distance.  WDC has also initiated an additional postcard effort to reach out to boaters that may be visiting Cape Cod Bay, one of only three areas currently designated as Critical Habitat for this species.

This month, WDC will be attending the Atlantic Large Whale Take Reduction Team meeting.  As a federally appointed member of this team, WDC is proposing additional measures to reduce the risk of entanglements.  We are also anticipating 2015 will bring long awaited proposals to increase Critical Habitat for this species. With its conservation partners, WDC petitioned the federal government in 2009 to increase habitat protections.  However, since no action was taken, WDC and its partners filed suit last April for unreasonable and unlawful delay in responding to our petition.  As the result of an agreement reached in November, the National Marine Fisheries Service, the agency charged with protecting right whales, must designate additional areas by early 2016. We are hopeful they will listen to all of our concerns and takes steps to provide the protection so desperately needed for the North Atlantic right whale’s survival.

Stay Tuned: We will be bringing you more blogs on right whales, the unfolding regulations and impending threats all month!

Posted in Blogs & Articles and tagged Boat traffic, Fishing, Homes for Whales and Dolphins
Preferences
We use cookies to help give you the best experience on our website and information about how you can support us.
Manage options Manage services Manage vendors Read more about these purposes
View preferences
{title} {title} {title}