WDC-NA intern Stephanie Wrobel just completed her internship, and we are as sad to see her go as she is to leave!

Who knew three months could be over so quickly! 89 days seems like such a long time but looking back it feels like it has really only been one month since I started my internship.

A lot has happened since I wrote my blog post about the first few weeks that I spent here in Plymouth and the Cape Cod area. A first rough count told me that during my time as an intern I saw and was able to identify about 70 different Humpback whales, a number that if anyone would have asked me at the beginning of the internship I wouldn’t have even come close to guessing.

September seems like a bit of a blur: four weeks of working both on the boat and in the office without any clear recollections of what actually happened. The whole of October, however, is very clear in my mind. By the time October came around I was used to only having one trip per day when I was on the boat which was definitely stress relieving but sad in a way because it means less time spent observing the whales. However almost every single trip that I was on over the last four weeks was amazing and filled with whales displaying all kinds of fun behavior. While a lot of trips in October had to be cancelled due to the weather that just made the days that we were able to go out more precious. One day that I will probably never forget was a trip in the last week of the season. We were fortunate enough to see about nine humpback whales mostly open-mouth feeding that day. While that in itself is always great to watch what made that day so special for me was that these whales continuously formed associations with each other, often coming close to the boat. 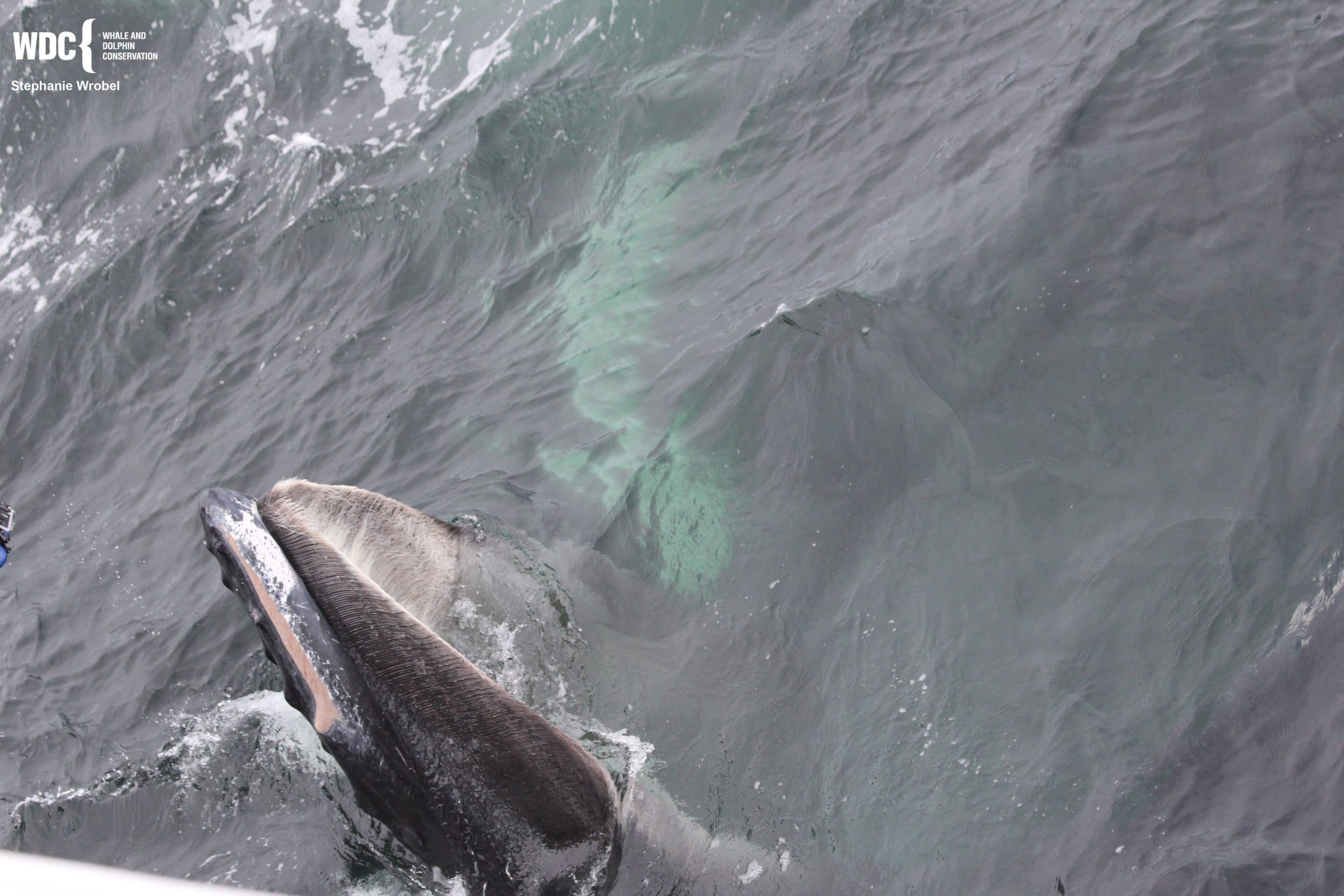 Milkweed and her 2014 calf completely made my day when they did a close boat approach and Milkweed came up with her mouth wide open, just next to our side. When you see open mouth feeding that close it really shows how far they can extend the pleats along their lower jaw. Just before that Milkweed’s calf did an amazing full breach right next to our boat as well, pretty much on top where all the adults came up to feed a few seconds later, fulfilling one of my dreams of seeing breaching close by as this really makes you appreciate their size again. Even those calves that are only about 10 months old right now are already so big!

And if all this wouldn’t have been enough to make a fantastic day on the boat, towards the end of the trip we were able to spot Baja, a whale that we just saw the day before for the first time this season, who turned out to be a mother this year as well. It was very interesting to see how in the middle of October there was a slight shift in which individuals we were seeing with a few new ones turning up, who as I’ve been told usually spend their time further up North. So it seems like they make a little stop over on Stellwagen Bank on their way to the Caribbean.

At the beginning of October I was also able to start working on my own project, which in my case involved finback whale identification. After spending a lot of time identifying humpback whales, my first thought was that fin whales couldn’t be that much harder.  This was certainly a mistake! Whereas most humpbacks are usually nice enough to raise their fluke at one point to give you a good look at it for identification (a whale named Mudskipper is excluded from this as she wants to make our life as hard as possible), finbacks are not always this considerate. One of their main identifying features is the chevron, which is a greyish pattern along the jaw line, and it is not always possible to see enough of this pattern to actually see the individual difference. Additional features such as different scars or differences in the dorsal fins can also be used. While the first few days of this were harder than I imagined, after a while I started to actually see the differences in the chevron pattern and it is amazingly satisfying to be able to just look at a few pictures of a finback whale and be able to recognize who it is or to be able to say that it is an individual that is not part of the catalog yet.

So now I am on my way back home (to Germany) and still can’t believe how much I learned during this short amount of time and how much I’m going to miss it. I was able to work with some fantastic people, experience working in one of the most beautiful areas that I’ve seen so far in America and of course see some of the most remarkable creatures on this planet!