On the orca and beluga capture front in Russia, things have gone from bad to worse in recent months. Four orcas were reported captured this past summer in the Okhotsk Sea, three of them now thought to be in China, and the orca quotas have been reallocated at 10 per year despite all the evidence warning against any quota decision until essential research is carried out.

But there have been some positive developments, too.

On 22nd September, Olga Filatova from Moscow State University who collaborates with the Far East Russia Orca Project (FEROP) supported partly by WDC, chaired a roundtable to discuss orca and beluga captures and captivity at the opening of the  “Marine Mammals of Holarctic” conference in St. Petersburg, Russia.

The roundtable attracted many people – at least 50 participants from Russia, US, Canada, UK, Germany, Norway, Finland and New Zealand. Along with many marine biologists, young and old, the audience had representatives from the two main whale and dolphin capture teams in Russia, aquarium staff and a representative from TINRO, the institute that justifies whale and dolphin captures. Naomi Rose, from Animal Welfare Institute, an outspoken critic of the captures and captivity, was also in attendance.

Three main speakers – Olga Filatova, Olga Shpak and Dmitry Glazov – identified the main flaws in the currently accepted procedures for assessing the number of allowable catches and controlling the capturing. You can watch the entire roundtable (mostly in Russian) here.

For orcas, the number of catches is based on flawed population estimates and does not consider the division of resident and transient ecotypes. Management and enforcement are both inadequate, which is leading to illegal capturing and the hushing up of whale deaths. According to the russianorca facebook page, the representative of TINRO denied all criticisms though he could not clearly answer any of the questions. He claimed that TINRO has no interest in orca capturing.

Yet, in a shocking new development, two days after the roundtable, TINRO announced an auction on their website to capture a young killer whale for their own purposes.

Meanwhile, FEROP and other Russian biologists organized two screenings of the documentary “Blackfish” for the marine mammal scientific community on the 24th of September and for the Russian public on the 27th of September. The screenings were at the “Marine Mammals of Holarctic” conference in St. Petersburg, Russia. 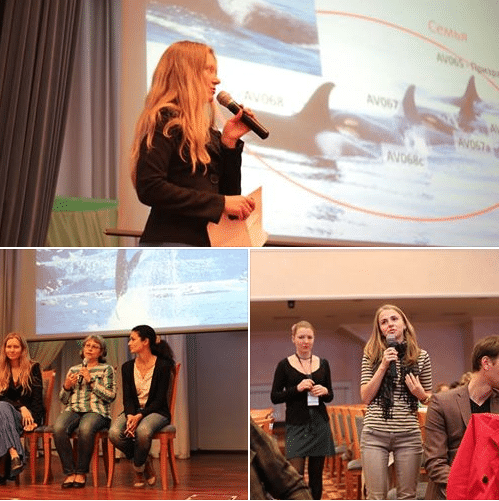 After each showing, there was considerable discussion on the orca captures in Russia. About 100 people attended both screenings.  At the conference screening on the 27th of September, two invited guests participated in the discussion – Naomi Rose and Gayane Petrosyan. Naomi Rose presented information about the experience of other countries and how public opinion could play a role. Gayane Petrosyan, a journalist and film director, is creating a documentary about marine mammal captivity in Russia and she presented a preview of her impressive film in process.

Audience reaction was positive. People mostly asked: “what could be done to change the situation in Russia?”.

As a followup, many organizations in Russia have expressed a desire to hold a screening of “Blackfish”.

Greater awareness of the true state of affairs with the capture-captivity industry is definitely needed in Russia.