The Irrawaddy dolphin is a wonderful and unique species of dolphin with several different populations, and sub-populations, displaying their own particular fondness for a specific kind of habitat. Unfortunately, it is this preference that is contributing to their decline, some faster than others. One of these sub-populations lives in Songkhla Lake in the south of Thailand and unfortunately their future looks bleak. 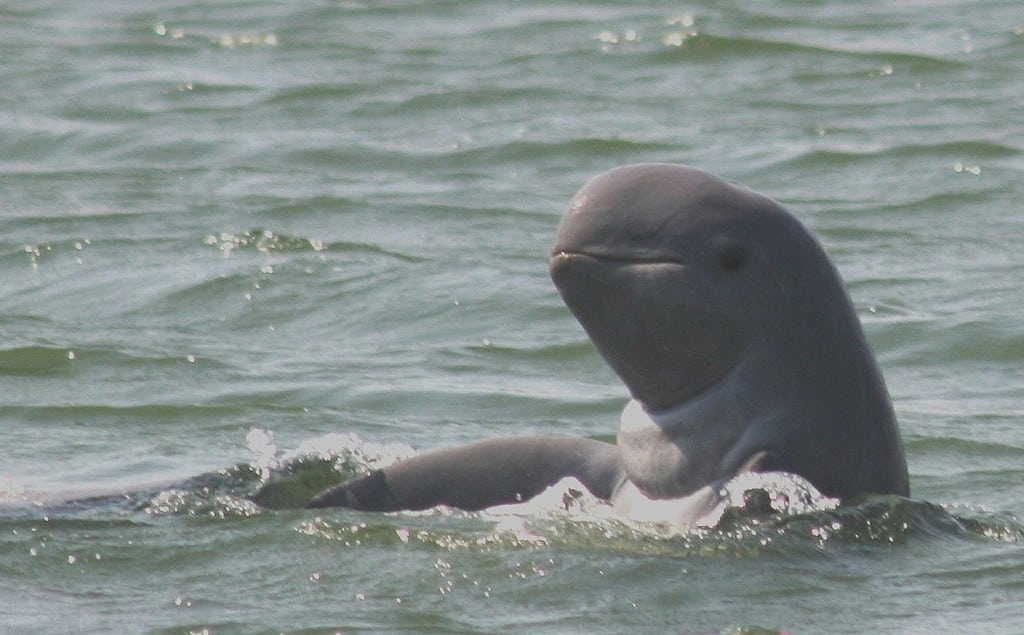 Found in coastal tropical and subtropical waters from northeastern Australia in the south, north to the Philippines and then west to northeastern India Irrawaddy dolphins mainly prefer estuarine waters that are close to mangrove forests although their presence in marine waters is also common place. Three populations occur only in freshwater river systems – the Mahakam River in Indonesia, the Ayeyarwady (formerly Irrawaddy from where the species gets its name) River in Myanmar (formerly Burma) and the Mekong River that runs through Laos, Cambodia and Vietnam. In addition to this, populations of Irrawaddy dolphins also occur in partially isolated brackish (a mixture of fresh and marine) or fresh-water bodies, including Chilka Lake on the east coast of India and the aforementioned Songkhla Lake in the south of Thailand. All five of these populations are listed as Critically Endangered.

Irrawaddy dolphins were first recorded in Songkhla Lake as recently as 1974 and despite being called a “lake”, Songhkla Lake is actually a brackish-water lagoon connected to the Gulf of Thailand by a small channel located at the southern tip of the lake. (The same can be said of Chilika Lake, where again it is connected to the Indian Ocean via a small channel). A second smaller channel used to be found at the northern tip of the lake however this has since been blocked by a “closure dam”, which prevents sea-water from getting in to the lake and ensures that the land surrounding the lake has plenty of irrigation. The remaining channel is teeming with fisheries gear (weirs and gill-nets) and navigating the channel would present quite a challenge for any dolphin wishing to venture out into the Gulf. Researchers believe that due to the extremely high density of fishing gear in the channel, the shallow water and the fact that no fishermen who fished the channel and associated lower section of the lake have ever seen a dolphin, it is very likely that dolphins do not move out of the lake into the Gulf of Thailand or vice versa, making this population all the more susceptible to localised extinction.

The other main threats to the Songkhla Lake Irrawaddy dolphins are accidental entanglement in gillnets and fish traps, prey depletion and pollution as a result of an increase in shoreline agriculture (specifically to the north of the lake), which uses large quantities of pesticides and herbicides that are regularly washed back into the lake.

Without movement between the lake and the waters in the Gulf of Thailand, this small sub-population are isolated from others of their species. Surveys conducted back in the early 2000’s found extremely low numbers of dolphin groups and it was thought at that time that the population in Songkhla Lake contained fewer than 50 mature individuals. Add to this the news that since 2010, 49 dolphins (including several calves) have been found dead … is there really any hope for this small population of dolphins that made this lake their home?

It must be noted however that the Thai authorities and the local communities have not just been sitting back doing nothing. In 2001, the Queen of Thailand designated the Irrawaddy dolphins in Songkhla Lake as a Royal Protected Species and in subsequent years several small community groups were set-up helping to raise awareness of these watery residents and extolling the virtues of the Irrawaddy dolphin as a valuable natural resource. Perhaps however, it’s all a case of too little too late?

Posted in Blogs & Articles and tagged Asia, irrawaddy dolphin, science
Preferences
We use cookies to help give you the best experience on our website and information about how you can support us.
Manage options Manage services Manage vendors Read more about these purposes
View preferences
{title} {title} {title}