There are multiple government agencies that are responsible for overseeing the care and well-being of Lolita, the only surviving member of the Southern Resident orcas that is still trapped in captivity.  The Animal and Plant Health Inspection Service (APHIS) is responsible for making sure the Miami Seaquarium’s tanks comply with regulations (they don’t).  The Occupational Safety and Health Administration (OSHA) oversees trainer and workplace safety.  And, if all goes according to the plan of The Orca Network, WDC, and the many other organizations that have fought for her freedom, she will be listed along with the rest of her family as a member of an endangered population of orcas, and her care and the decision of what happens next will fall to the National Marine Fisheries Service (NMFS).  They are in charge of the majority of marine mammals on our planet, and ultimately oversee all endangered whales and dolphins – all members of the population – and making sure that population recovers.

The goal for every endangered species is to be taken off the list, provided they have recovered enough to actually no longer be endangered.  The Southern Resident population, whose numbers declined due in no small part to the infamous Penn Cove roundup of 1970 (when Lolita was captured), has yet to rebound.  In a completely arbitrary addendum to the original 2005 Endangered Species Act (ESA) ruling, all captive members (or just Lolita) of the Southern Residents were excluded from the listing.

It is a tangled mess of policy, government, and regulations that “manage” marine mammal captivity.  NMFS was in charge, under the Marine Mammal Protection Act (MMPA) until amendments in 1994 that were largely driven by the captive industry to reduce NMFS’ role of overseeing captive whales and dolphins.  These amendments relegated NMFS to making sure that captive facilities had an educational component – that the individuals held for public display were being used to teach the public about whales and dolphins.  The oversight of tank size, shade provided, and the general mechanics of implementing captive care regulations fell to APHIS, an agency of the US Department of Agriculture, adhering to regulations set by the Animal Welfare Act (AWA).  However, as NMFS has jurisdiction over all endangered whales and dolphins, if Lolita were to be officially declared a member of her endangered population, NMFS would take over from her current “owners” in determining her future.

The legal battles over Lolita are fairly new ground for The Orca Network, a non-profit based in Washington that has been fighting to return Lolita to her home waters since 1995.   In 2011, lawsuits over violations of the AWA and the ESA exclusion began, and the legal process is still ongoing.  APHIS has been sued for not addressing obvious welfare violations of the Miami Seaquarium’s facilities – the too-small tank and lack of shade and companionship, among other issues.  Lolita’s swimming pool may have been a state-of-the-art whale tank in 1970, but it has not been improved or updated since then.  APHIS is responsible for inspecting facilities and making sure regulations are met, but they did not even review permits or the facility when the Seaquarium was sold earlier this year. An appeal has recently been filed in the case against the USDA for allowing automatic renewal of the Seaquarium’s license.  In addition, the USDA came under recent fire in Congress for failing to update the standards for marine mammals in captivity for almost twenty years.

Last month, one of the many agencies finally stepped up to address one of the issues of captivity for Lolita.  On July 10th, OSHA issued a citation to the Miami Seaquarium for failing to provide sufficient protection to its workers against a “struck-by or drowning hazard,” fined them $7,000, and ordered them to take actions to amend this violation.  Similar citations were issued to SeaWorld following the 2010 death of Dawn Brancheau, after which OSHA required trainers to have physical barriers or maintain a safe distance from captive orcas.  The Seaquarium has continued to do “waterwork,” including riding on Lolita’s back, and allows park visitors to get dangerously close.  SeaWorld is still not allowed to have their trainers in the water, making the Seaquarium the last marine park in the U.S. to allow its employees to enter the water with orcas.  OSHA made its initial decision based on a long list of incidents involving captive orcas at marine parks, and the inherent risk of close interaction with a top predator.  Earlier this year, SeaWorld lost an appeal of the case, and must continue to comply with OSHA’s ruling.  They have not yet indicated whether they will appeal this final decision to the Supreme Court.  The Miami Seaquarium has limited time to decide if they will appeal the citation, or pay the fine and comply with new regulations. 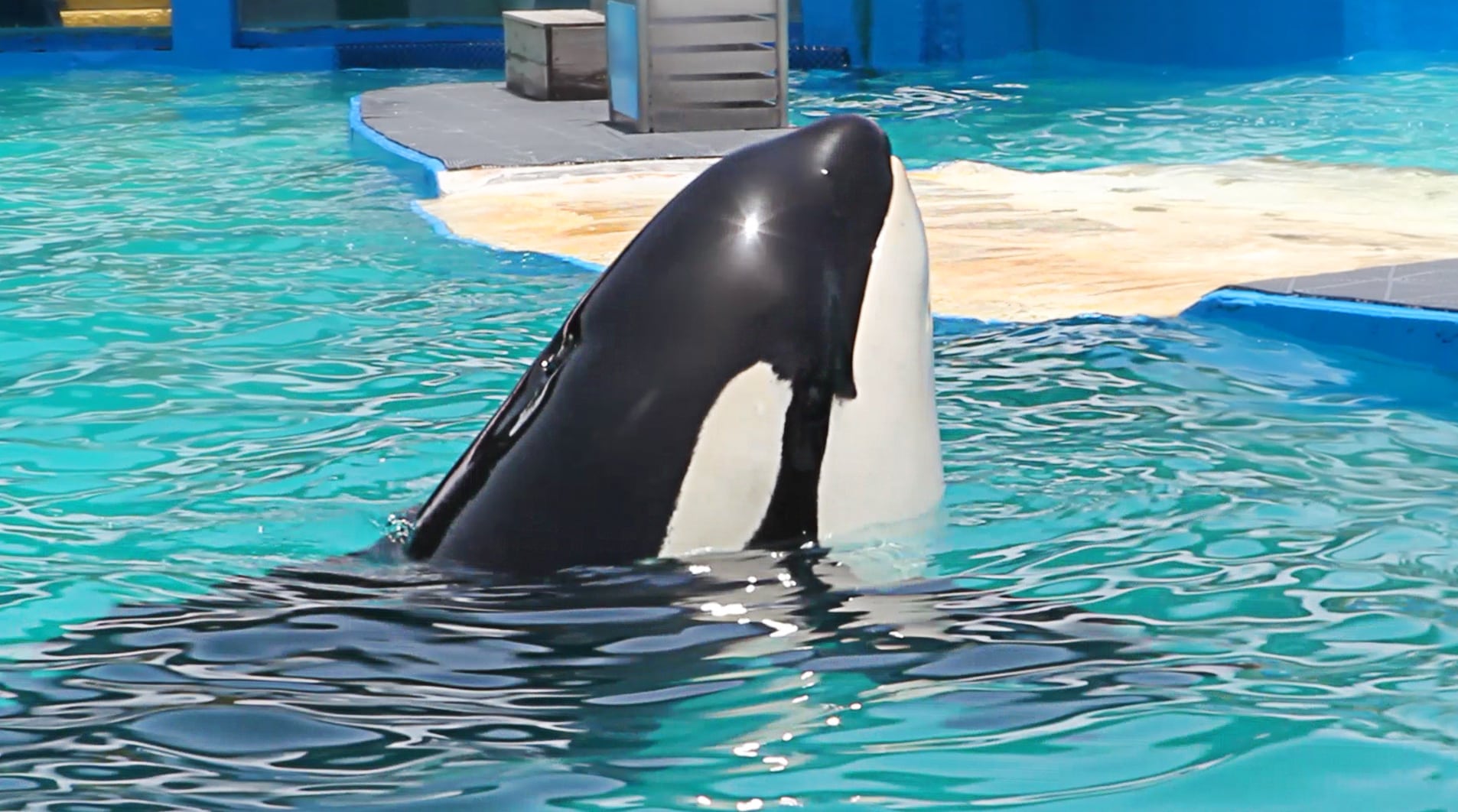 Currently, Lolita performs two 20-minute shows per day and otherwise is stuck in a tank that is 20 feet deep and 80 feet across (35 feet in the horizontal direction).  She herself is approximately 21 feet long and weighs about 7,000 lbs.  She is longer than her tank is deep, and it takes two good pumps of her tail to propel her across her entire pool.  Despite these conditions, Lolita remains active and healthy, and regularly “exercises herself” between shows, according to Howard Garrett, director of the Orca Network.  Her relatively good health and well-documented capture make Lolita a unique case for release among captive orcas.  We know exactly where she came from and who her family is – she still makes the calls that are distinct to her pod of Southern Resident orcas – and her survival in a captive environment means she is probably one tough lady who is capable of re-adapting to her native waters.  There are demonstrations at the Seaquarium every Saturday to support her freedom and eventual return to home waters, and the Orca Network has a detailed plan for her retirement.

WDC continues to fight for an end to whales and dolphins in captivity as public sentiment against the practice continues to grow.  We supported the proposal to include Lolita in the endangered listing with the rest of the Southern Residents and are anticipating the next move after NMFS’ final ruling early next year.  We are involved with the battle to end live captures in Russia, which supplies the growing captivity industry in Russia and Asia, and are fighting the cruel practice of overseas as well as here in the US.

The wheels of policy move slowly, especially when multiple agencies are involved, but we have hope for the future.  Things are finally moving in the legal battle over Lolita’s fate, and it looks like they are moving in the right direction.  Our work to end captivity is only possible through your support.  Your efforts to write letters, sign petitions, educate your friends, and donate to WDC makes a difference.  Thank you for all you are doing to help end this cruel practice, and we have hope that together we will see the day that Lolita is included with her family as an endangered Southern Resident orca, return home to feel the movement of the ocean and hear the sounds of the wild. and catch up with family and old friends she hasn’t seen in a long time.

Posted in Blogs & Articles and tagged captivity, Lolita, Orca, OSHA, Southern Residents
Preferences
We use cookies to help give you the best experience on our website and information about how you can support us.
Manage options Manage services Manage vendors Read more about these purposes
View preferences
{title} {title} {title}