SeaWorld’s response to the growing ‘Blackfish effect’ continues to be that the movie is a misrepresentation of the facts that is based on a biased agenda. This argument is significantly undermined by the constant and repeated refusal by Sea World to be interviewed or to in any way give their side of the story. For an organization that claims it is educating the public, it seems odd to be consciously and deliberately withholding information. On the contrary, this seems to be more the attributes of a floundering business, desperately attempting to protect the company’s proprietary information. By continuing their oxymoronic attempt to both hold the high ground and pull the wool over the public’s eyes, SeaWorld’s illogical assertions sound strikingly similar to the desperate cry, “pay no attention to the man behind the curtain!”

However, the parallels to the story of the Wizard of Oz potentially run deeper. Whales and dolphins that are wrongly held in captivity would surely identify with the tale of Dorothy, desperate to get home to her family. In her efforts to do so she comes of course comes across a cowardly lion, a heartless tin man, and a scarecrow in search of brains. The characters ultimately reveal that they had these characteristics within them all along, as they rush to Dorothy’s rescue when she is kidnapped by the Wicked Witch of the West.

While I am not attempting anything as grandiose as comparing SeaWorld to a Wicked Witch, the themes of brains, a heart, and courage are as important in combating Sea World’s wrongful captivity of whales as it was for Dorothy’s traveling companions combating her captivity at the hands of the Wicked Witch. 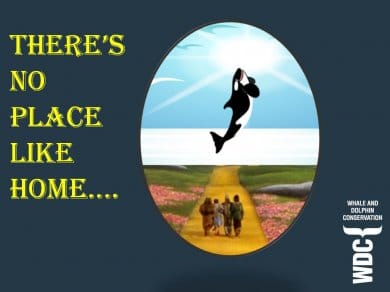 Brains: Our collective intelligence and understanding of these animals has increased considerably since the era of keeping animals in captivity began. Not even SeaWorld tries to claim that these individuals are not intelligent or incapable of feeling. Rather they claim that they enjoy the artificial relationships they have with their trainers. Yet there is no educated argument for any intelligent predator appreciating the dead scrapes they are fed after being forced to perform for our amusement. Ultimately, the argument against captivity is a no-brainer.

Heart: Again, the heart, or compassion, of the situation becomes fairly apparent. The evidence of the emotional and physical suffering caused by SeaWorld’s practices has been well documented. Blackfish, Death at Sea World, and numerous respected expert opinions could not paint a picture of suffering that is any clearer. Continuing any practice that causes needless suffering is the diametric opposite of compassion by any definition.

Courage: When presented with what we perceive as a moral wrong, it is up to each of us to find the courage to take a stand on the issue. Although taking such a stand may not be the easy choice, those with courage reject any alternative. When it comes to the question of captivity, more and more people are finding that courage. Nowhere is this more prevalent than the actions of the youth. Students who refuse to attend a field trip to Sea World and a young girl courageous enough to protest SeaWorld at parades are demonstrative of the fact that as a society, we are finding the courage to change our ways and our values for the better. The only question that remains is whether or not SeaWorld will find the courage to change or let their inaction be the shovel with which they dig their own grave.

Movies offer us the ability to escape into a fictional world for a few hours. It is easy to take a break from the daily grind and become emotionally invested in a fictional protagonist as we hope for a happy ending. Few films in cinematic history offer such a clear portrayal of goodness and innocence pitted against the wickedness of a villain like A Wizard of Oz. If it is so easy to hope for Dorothy to find her way home at the end, should it not be equally easy to hope for captive cetaceans to also find their way home? After all, there is no ‘Emerald City’ that Sea World could ever construct that can compare with the open ocean. The whales at SeaWorld may not be capable of clicking their heels together, but that does not change the fact that for a whale, there truly is no place like home. The sea is where they belong, and this reality ultimately undermines any imagined response that SeaWorld could invent.