Extinction is a sensitive word in New Zealand. Around the world, people have an image of New Zealand as a wild, natural landscape with protected oceans, a nuclear free zone in the glorious “land of the hobbit.”

In fact, as relatively unspoilt as the country is and as much as I like New Zealand, it could be called the land of extinctions. The animals that disappeared were land-based, notably 14 species of that large flightless bird the Moa, and 57 total extinct endemic bird species in New Zealand. 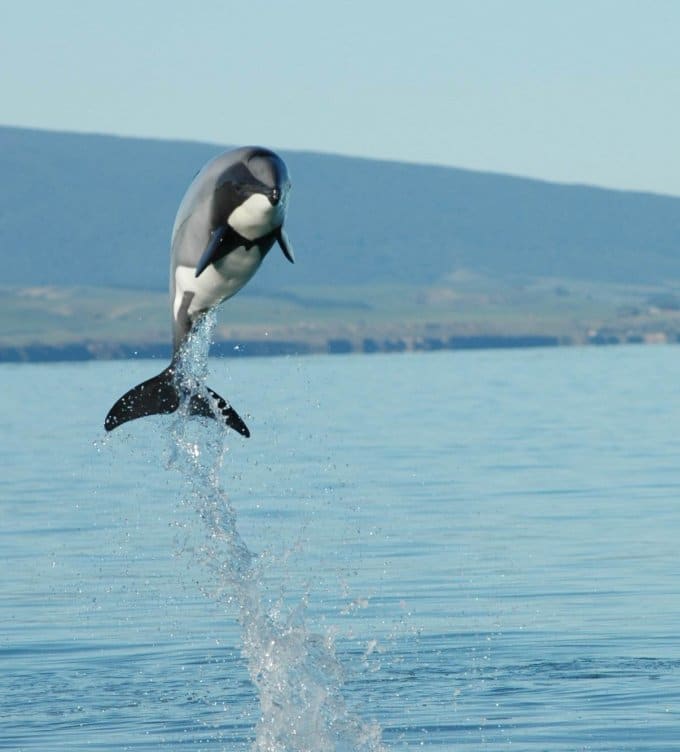 New Zealanders are currently grappling with the unthinkable possibility of a marine extinction. The candidate topping the list for “next to go” is the New Zealand (Hector’s and Maui’s) dolphin, the world’s only oceanic dolphin species living entirely in the waters of one country.

Recently I travelled to Dunedin, New Zealand, for the Society for Marine Mammalogy Biennial Conference, the largest whale gathering in the world. There, I heard nonstop extinction talks and discussions about this dolphin. In truth, I have been hearing such talk for the past few years.

The conference featured several talks and posters on the New Zealand dolphin which was described in the conference materials as “currently being in a race to extinction with the vaquita or Gulf of California porpoise.” Mexican biologist Lorenzo Rojas de Bracho spoke, eloquently, about his efforts and those of his government to stop the steep decline of the vaquita and what might be learned and transferred to the efforts to save the New Zealand dolphin.

For dolphin scientists and conservationists, extinction is already a dirty word. Six years ago, they had to face the news that the baiji, or Yangtze river dolphin, had gone extinct. The recognition that extinction can and does happen despite what we know and the efforts that are made to help has sharpened the thinking of whale and dolphin scientists as well as of the agencies that have the power as well as the responsibility to help.

The general theme of this first New Zealand-hosted biennial conference revolved around the idea of good science informing conservation.

Following the conference, on 17th Dec, in Akaroa, New Zealand, WDC hosted a special workshop and dolphin watching trip to try to inspire politicians from around the country to try to solve the crisis. Conference keynote speaker Barbara Taylor, an American dolphin scientist and authority on dolphin conservation, spoke at this event organized by WDC’s Mike Bossley and WDC campaigner Gemma McGrath.

For the New Zealand dolphin, extinction won’t happen today or tomorrow, but it will surely happen at the current rate that these small, lovely dolphins with the characteristic rounded dorsal fins, are being caught in fishermen’s nets. Between 110 and 150 are caught accidentally every year in set nets and trawls. Largely because of this kind of fishing, the New Zealand dolphin, also known as the Hector’s dolphin, has declined from about 30,000 individuals a few decades ago, to 7,200 today.

The New Zealand dolphin comprises four distinct populations living in different areas of New Zealand, with limited gene flow between them. The first to go will be the North Island population, the so called Maui’s dolphin, which has declined from 2000 a few years ago to only 55 adults today, with only an estimated 15 breeding females.

A few weeks ago, conservationists and local campaigners led a death march in Wellington, carrying caskets for the smallest of the four populations of the New Zealand dolphin. This was in response to the New Zealand government Department of Conservation (DOC) setting aside a small area of the sea to be free from the fishing nets. The DOC has been setting aside areas, and at least one larger area at Banks Peninsula off the east coast of the South Island has been shown to reduce the number of kills, but overall, the reduction is not enough to arrest the decline.

The scientists led by Professors Elisabeth Slooten and Steve Dawson, of Otago University, who have spent their adult lives studying this dolphin, are in agreement that if commercial and recreational set netting and commercial trawling could be eliminated from coastal New Zealand waters of less than 100m depth, then the race to extinction could be reversed, and the species could still recover.

Local, national and international conservation groups are also in agreement. Not just a few of them; all of them. Rarely do we find such universal accord on a conservation solution.

WDC, as part of its Homes for Whales and Dolphins campaign proposed that a marine protected area for the New Zealand dolphin be created as part of the set net and trawl fishing ban in the waters less than 100m around New Zealand. This New Zealand Dolphin MPA or Sanctuary could provide a powerful international message for conservation, something that would contribute greatly to New Zealand’s tourism brand, and provide a legacy of success to last for future generations reversing the trend set by the previous extinctions.

This solution was described in depth in my book Marine Protected Areas for Whales, Dolphins and Porpoises (Earthscan/Taylor & Francis, 2nd Ed., 2011).

Of course, the solution seems simple from the point of view of dolphin scientists and conservationists but what about the people of New Zealand? How well do they know this dolphin? Do they care if the New Zealand dolphin goes extinct? Are New Zealanders prepared to pay more for their fish ‘n’ chips? What is the value lost by 110 to 150 of these animals dying every year? How much is a dolphin worth to people?

In the second blog in this series on the theme of “How to Lose the Race to Extinction,” I will delve into the results of a new economic study specially commissioned by WDC, Whale and Dolphin Conservation, to answer these questions. The results were as big a surprise to us as I think they will be to you. An overwhelming majority of Kiwis want their government to move the fishermen away from the dolphin areas or ask the fishermen to change their fishing methods, and Kiwis are willing to pay more in the shops for their fish to save the dolphins.