At the 2012 annual meeting of the European Cetacean Society (ECS) in Galway, Ireland in March, the annual Conservation Award – which is part-sponsored by WDCS – was given to Dr Peter Evans.

Mark Simmonds, the WDCS International Director of Science, helped to celebrate this event with a speech which is reproduced below virtually verbatim (give or take some adlibbing indicated by square brackets). It is important to note that Dr Evans later disputed some of the ‘history’ recounted here and that he was walking with the aid of a stick after he broke his leg in a fall in an icy marina in Wales a few months back. BDMLR is British Divers Marine Life Rescue.

Ladies and gentlemen, it gives me great personal pleasure to now address the ECS with my short paper entitled:

The Natural History of Peter Evans

.. And whilst the sample size is certainly not large, I hope that you will agree that it is significant!

My study period covers only the last two decades, but there are earlier sightings records that have been carefully verified based on some quite distinctive and long-lasting markings. [Reference was made here to Peter’s distinctive shock of hair and a comparison drawn with the hair styles of currently-popular boy band One Direction].

There is also a general agreement that at some unknown point that Peter must have been born. And the earlier hypothesis of Donovan, Hammond, Foot and Rogan that he was cloned has largely been discredited on the simple grounds that he is truly unique.

Ethically-conducted genetic sampling reveals Peter to be of both English and Welsh stock. His early academic ‘prey’ seems to have been largely avian [for this cetacean-orientated gathering, I note that this refers to birds] and it is believed that he played a role in the infamous exploding starling incident in Oxford (which you may like to ask him about later).

Indeed, around the time that he surfaced in marine mammal matters for me, his distribution was in fact centred around Oxford – although all tagging attempts have to date failed. He famously held meetings of the great and the good (including the JNCC) in his Oxford bedroom, which was allegedly also the location of the new legendary sub-mattress data-storage cache.

There is evidences of some regular seasonal long distance movements to the Caribbean [where for all we know he may have a second life as a pirate] and this seems to be something to do with birds again [allegedly a parrot], and also shorter on- and off-shore movements along the coasts of Western Scotland, where this highly-social animal is well known in many local bars. This range at one time almost certainly extended to Ireland, where romantic behaviour has also been suggested.

[It is not entirely clear if this romantic behaviour was focused on his beloved seabirds, his first whale sighting (which was indeed in Ireland) or as the ‘Berrow Theory’ has it, that this involved a “flame-haired, green-eyed, Kerry girl”.]

Oddly enough the relevant copy of the ECS Journal on this topic was never published.

I will not elaborate further on breeding behaviour as others are better qualified, but I believe it involves some well-rehearsed dance steps as frequently seen at ECS meetings.

Over the now many years that I have known Peter and had the privilege of often working with him in tandem on issues, his influence on European cetacean conservation across Europe has simply been enormous. He occupies a niche that can only be described as uniquely Peter Evans-shaped. He brings a widely-respected integrity to all his work and somehow manages to span the weird divides between academe and NGOs and science and conservation policy. The fact that he does most of this from a small NGO-platform, I think makes this all the more remarkable.

Peter’s publications range from high-impact journals to the famous UK cetacean Atlases (based in part on that fabled sub-mattress data cache). There are also many Evans’ books and many of us always keep a copy of his 1897 classic “The Natural History of Whales and Dolphins” at hand at all times.

Peter is also outstanding in the sphere of education. For many of us he has been a mentor; even if in some cases he did not know it.

He birthed the Sea Watch Foundation in 1991 and more to the point here [at the ECS annual conference], he was fundamental in the founding of the European Cetacean Society; once there were five (he was the first Secretary) and now we are almost five hundred. For many years he was also, of course, the essential ECS editor, churning out those distinctive volumes and putting us all through our paces.

If Peter Evan’s is not the Father of the ECS, he is at the least our beloved Dancing Uncle.

Peter’s home territory has now moved to his beloved North Wales and many of your will have noticed evidence of a recent stranding event in Pwllheli Harbour. Fortunately Peter was successfully refloated (and my suspicion is that he may need to be refloated again later tonight – so BDMLR please go on standby) – and unfortunately we will not be treated to those famous dance moves this year.

Ladies and Gentlemen, it was of course only a question of ‘when’ and ‘how long’ we would make Peter wait –  rather than ‘if’ we would pass this award to Peter. He epitomises in his career to date all that is appropriate in terms of moving science into conservation action, and he does this with energy, enthusiasm and modesty. To steal a comment from Greg Donovan [who gave a key note speech earlier]: he is “humility mixed with knowledge”.

Please now prepare to again make a loud noise for our

the Inspiration that is the unique and remarkable Dr Peter Evans. 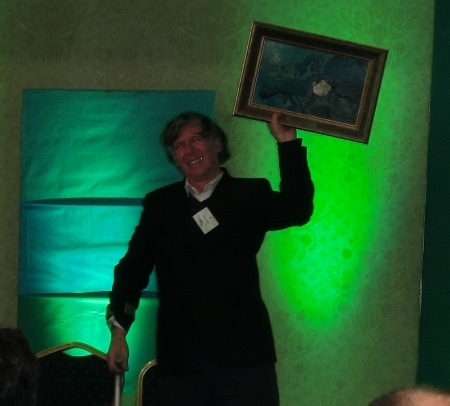