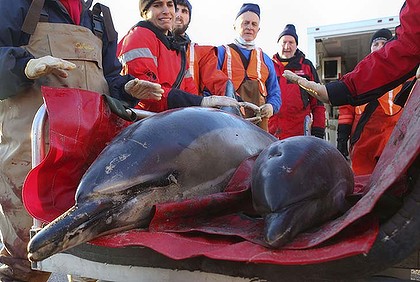 A female and her calf being carried back to sea on the Cape photo: Reuters

While many try to understand and improve the outcome of recent dolphin strandings on Cape Cod – half a world away free swimming dolphins are being brutally slaughtered on a regular basis. We are sad to report that the annual dolphin drive hunts in Taiji continue unabated.  Dolphin drive hunts are an accepted practice in Taiji, Japan – the village featured in the Academy Award Winning Documentary The Cove.  There, these magnificent animals are slaughtered for meat or kept alive for sale to marine parks and aquaria across the globe. The dolphin species primarily hunted in Taiji include: bottlenose dolphins, pilot whales, false killer whales, Risso’s dolphins and striped dolphins.

We operate in the face of disturbing contrasts when it comes to our treatment of dolphins – as fervent work is being done to help stranded dolphins return to the sea in the US, dolphins in Japan and elsewhere are being harassed, corralled and essentially forced to strand before they are brutally slaughtered.

While we receive alerts of dolphins near shore in Cape Cod Bay – rescuers work to prevent strandings; however, dolphin alerts in Taiji are handled very differently. In Taiji, the alert of dolphin pods often results in fishermen driving the dolphins into the cove and then closing it off with nets to prevent their escape.  Another very stark 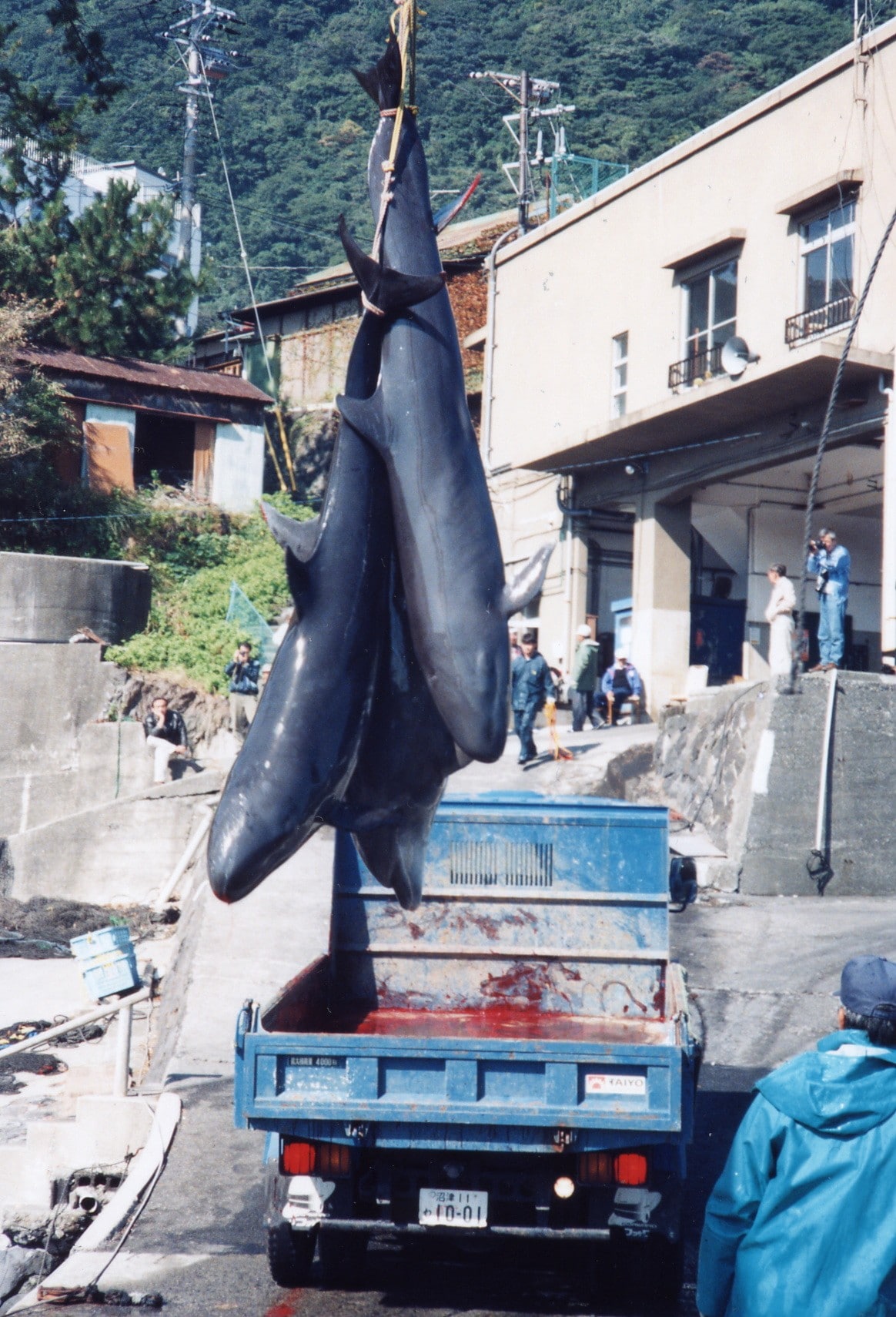 contradiction is when stranded dolphins on Cape Cod cannot be returned to the sea, they are humanely euthanized.  In Taiji, dolphins are killed by driving a metal rod into their neck.  The small percent of dolphins in the cove that are spared from slaughter are ripped from their families and condemned to a life in captivity or swim-with programs.

January marks the mid-point of the annual hunt season: September through April.  The government-issued quota from Japan for this season in Taiji is 2,165 dolphins (mixed species).  During the 2010-2011 season, over 1,200 dolphins were killed and observers on the ground indicated that at least 150 dolphins were taken alive for aquaria.  Also, according to Wakayama authorities, 68 short-finned pilot whales were also slaughtered for meat and 6 were captured alive for aquariums during an extended hunting period which lasted until June.

WDCS works diligently to support global initiatives and efforts within Japan to seek out and support an end to drive hunts. Currently there are no signs from the authorities that the hunts will cease anytime soon.  However, in the near future, WDCS will publish a report on the cruelty and suffering associated with the killing methods currently utilized in the drive hunts.

Despite the controversial nature of the hunt, the international criticism, and the health risks that the often polluted meat can cause, thousands of dolphins are caught in drive hunts each year. While we are proud to work with stranding networks in the US to save dolphins, the dolphin drive hunts are a reminder that we have a very long way to go towards securing a safe future for all cetaceans. If you care to support our stranding response efforts and our work to end drive hunts and captivity you can make a gift now. You can also learn more about these issues on our captivity page and whaling page.