Occasionally accounts come our way of observations on whales that are unusual and very interesting. I recently heard of one such incident and asked the guy who told me the story, Bertie Gregory, who is a student at the University of Bristol, if he would write it up so that we could share it.

He kindly did and here is that account beautifully illustrated by some of his own photographs:

Last summer I visited the west coast of Vancouver Island in Canada, to aid a wildlife tour guide on his boat. The majority of our trips involved searching inlets and sounds for black bears, bald eagles and the mysterious coastal wolf. About once a week however, we’d take guests out to sea to find grey and humpback whales. During the summer months, these two species come in huge numbers to feed on the explosion of aquatic life. The grey whales spend most of their time in shallow water, often less than 20m deep, feeding on mud dwelling invertebrates. The more charismatic humpbacks meanwhile, feed on small fish further offshore.

As a result of their huge numbers, we saw both species on every trip. All the while on the water we’d always be watching out and listening on the radio for orca (killer whales). The pods which visited the waters we searched for were the ‘transient’ variety, they feed on marine mammals and are notoriously hard to find as they’re constantly on the move up and down the coast. For that reason it was common for there to be only one sighting a week by the tour operators. The other variety, known as ‘resident’ killer whales tend to stay around the same area feeding on fish. There is much debate over the taxonomy (evolutionary classification) of killer whales and its generally agreed that there is probably more than one species as the different ‘cultures’ have not interbred for thousands of years. 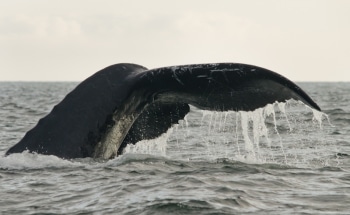 I was particularly keen on finding them as up to then my sightings were limited to the various BBC landmark series! On one particular afternoon, we had a full boat of 12 guests and decided to make our way to Cow’s bay, an area we had consistently seen grey whales for the past few weeks. Just as we exited the harbour, I heard the boat’s radio crackle briefly; my boss, the boat’s captain, took it off the latch and held it to his ear. After a couple more crackles he turned to me and smiled, ‘the black and whites are out there’, he said. In very good spirit, all the tour companies work together and let each other know where the various animals are. Whenever the possibility of a rarer sighting came up, as with the coastal wolves, we didn’t tell the guests immediately because as quickly as they’re spotted, they may just disappear. My boss changed the course of our 20 foot Boston Whaler away from Cow’s bay, directly out to sea. As we got closer to the GPS coordinates we had been given, more details came through. A voice once again crackled on the radio, ‘there’s more than ten of them’, my ears pricked up. I stood up out my seat and scoured the water ahead of us with my binoculars; 500m ahead was the boat we’d been hearing from. Suddenly, I spotted numerous ejections of water-vapour, firing high up into the air, the tell-tale sign of whales.

Whale watching regulations state that boats aren’t allowed to approach the whales closer than 100m, but the killer whales didn’t know this as all twelve headed towards us. I’m a passionate wildlife photographer but these whales were proving tough to get good pictures of. Their faces were only up for a fraction of a second, followed by their proportionally massive dorsal fin, before they dived back under the surface. 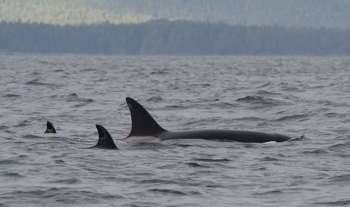 I then heard another pair of exhalations but this time from behind the boat, they sounded deeper and louder to what we’d heard so far that day. I turned to see two adult humpback whale surface 30m from the boat. The killer whales weren’t approaching us, they were approaching the humpbacks, we just happened to be in their way! The killer whales got closer and closer to us, barely 5m away before they dove under our boat towards the humpbacks. Then everything went eerily quiet. All the whales were under the water, the boat engines were long switched off.

The silence was broken by an almighty trumpet from underneath the water; it vibrated our stomachs right down to the core. The sound was made by one of the humpbacks and moments later it surfaced continuing to let out these very elephant like noises. The killer whales then surfaced all around it, rolling on their sides and tail slapping. Never before had any of the guides (some with 30 years experience) seen killer whales attacking adult humpbacks. What’s more, within the pod of orca were a couple of juveniles- signified by their white skin having a yellow tone. These two youngsters were getting stuck in swimming just metres from the humpbacks, as they tried to join in on the action.

After a good half hour of the killer whales tail slapping, harassing and chasing the humpbacks, the tables turned, the 15m long humpback adults had had enough. The next time all the whales surfaced, it was the humpbacks that were doing the chasing. 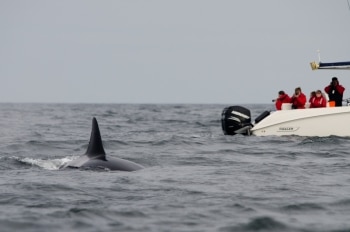 Unfortunately, our time on the water was up, what should have been a two hour whale watching trip had already become three and an half. I begged my boss to stay but (apparently!) the customer is always right and understandably some of the small children on board were getting very cold. I’ll never know how the story ended. I feel very privileged to have witnessed such an incredibly rare event. I’ll be going back next summer to try my luck again!