For many years, while doing presentations I have been telling kids I like whales for lots of reasons. One reason in particular is because they pee, and poop... in the ocean. That's something to think about while gulping a mouth of sea water at the beach. Think about it for a minute. According to NOAA, there are over 2,000 whales that feed off the coast of New England each summer. Each fin whale will pee about 970 liters, or 256 gallons, a day. That’s over half a million gallons of pee a day, just from fin whales. Now add in about 1,000 humpbacks, 400 North Atlantic right whales, 3,000 minkes, a few hundred sei whales, and thousands of dolphins! And that’s just pee off the coast of New England- now you have to add in their poop too!

Talking about pee and poo is the nightmare of every etiquette teacher in the world, but it’s a biologists dream come true! Poop can tell biologists lots of interesting things about animals:

What’s not common knowledge is that most of the oxygen we breathe is produced in the ocean by by phytoplankton - a tiny plant-like organism found in the ocean. Like its cousins on land, Phytoplankton, too, needs nutrients. However, living near the ocean surface for sunlight, phytoplankton can’t get nutrients from the “soil” or ocean bottom. Instead, it must rely on nutrients in the water column. Yup, you guessed it- whale pee and poo, among other things- are nutrients. And just to reinforce how important whales are to us, and their role in the environment, researchers in Australia discovered that whale poo is needed to fight Climate Change! According to a recent article in New Scientist, "If you add soluble iron to the ocean, you get instant phytoplankton growth," says Nicol. The amount of iron in whale faeces (poo) means that protecting Antarctic whales could swell populations of phytoplankton, which absorb carbon dioxide.

So not only do we need whales to breathe, but we need them to reduce CO2 in the environment. Poo is different though, depending on the diet of the whale. For example, sei whales prey mostly on euphasiids, which have a hard exoskeleton, and their poop is bright red and floats (image below). Humpbacks, on the other hand, feed mostly on small, oily fish. As a result, their poop (image above) is brown and primarily liquid. What I have a hard time getting over though- is the "you are what you eat". Whales may not have very good table manners after all- consider they will often defecate while feeding! None the less, I am glad they are there and doing their thing. And just think- the next time someone asks you why you like whales- you can confidently tell them it’s because they pee and poo and you like to breathe and want to help to protect the environment! (And they are really, really cool!). 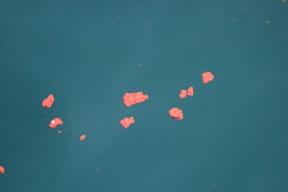